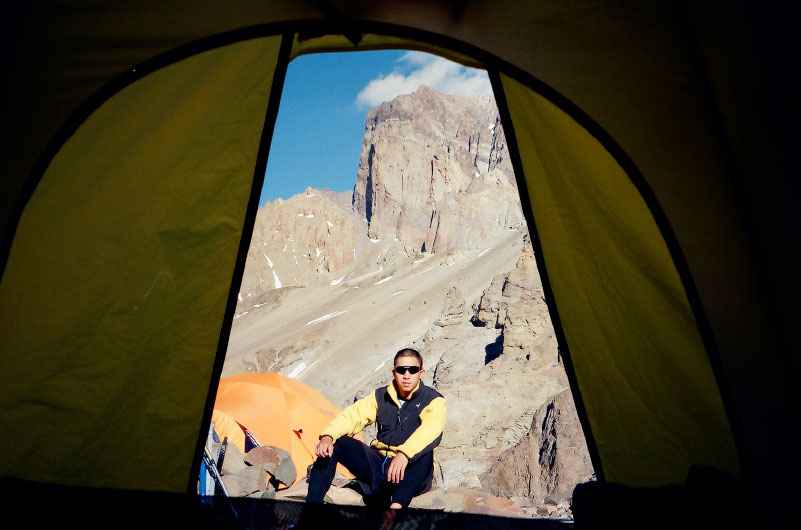 [At the point of writing this account, I was a student in the UK. Looking back now on those days almost 20 years ago brings back nostalgia and memories! Also, little did I know then that I would carry on with this strange out-door hobby of mine.]

This year (1999), due to the Millennial celebrations and all, the flights back to Singapore were over-booked, so the only plane I could get on was scheduled to fly back to London on the 1st of January! Instead of risking my life in a Y2K disaster, I decided to head down to S. America instead, to climb Mt. Aconcagua, or Cerro Aconcagua, as it is known. This is the tallest mountain outside of the Himalayas, standing at 22,800 feet.

I was climbing with an American group we met up in Mendoza, a small town in Argentina before embarking on the climb. Mendoza is famous for its wine, and beautiful women. Let me just say that I’m not surprised that S. America has produced so many Miss Universe’s, and the people there are incredibly friendly. I didn’t know a word of Spanish to start with, but managed to communicate with the locals quite well, using my phrasebook. Of course, sometimes, you translate words wrongly, but that’s not a story for general circulation.

Dec 17, we set off up the Upper Vacas valley, a non-technical route that was off the normal route. There were 6 of us in the group – 2 guides and 4 clients. The approach took 3 days, and we had mules for this part of the trip, which made it much more bearable. This was when I became acquainted with the food that we were to have for the next 18 days. Candy bars, cookies, chocolate and other caloric-dense foods. This was a far cry from my usual diet of steamed vegetables and pasta, but of course, if the experts recommend sweets, who am I to say no?

Our program involved going to base-camp, then double carries from camp 1 to camp 4 (high camp). This meant carrying up half our gear 2000 feet to the next camp, then returning down to our previous camp. The next day, we would break camp, climb up and set up camp again. This slow progression was necessary to ensure that the body acclimatized and could have enough time to generate more oxygen carrying red blood cells. Along the way, we saw bizarre snow formations called the Penitentes. 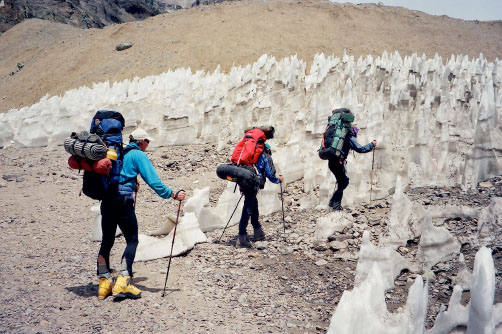 You know that you’re on a serious mountain trip when you hear your tent buddy unzip his sleeping bag, and start peeing into a bottle. Highly bizarre. It’s so cold up high that if you don’t put your water-bottle into the bag with you, it freezes. Other high-altitude conditions include chain-stoking. This happens when your breathing slows during sleep, and your body doesn’t get enough oxygen, and you choke, waking you up. It is as if every time you’re about to drift off to sleep someone puts a weight on your chest. Thankfully for modern medicine, scientists have discovered that Diamox, a drug used to treat glaucoma, can also trick the body into increasing its breathing rate.

Squatting there, trying to burn your used toilet paper (doesn’t decompose due to the dry weather), but there’s insufficient oxygen, so it doesn’t catch on fire. The smoke makes your clothes smell like shit, literally, and your ass is freezing from the cold. But the amazing view from your outdoor potty makes it all worthwhile. (In the US, they use WAG bags – short for Waste Alleviation and Gelling. You have to pack out EVERYTHING you bring in!)

Our first night at high camp, we were lying in our tents listening to the howling winds. The guides were telling us how on a previous trip, the wind had ripped their tents to shreds and broken the tent-poles, so we should count ourselves lucky. Due to the weather, we couldn’t make a summit attempt, and had a rest-day. But just lying in our sleeping bags, waiting out the bad weather, our heart-rate was over a 100. By then, everyone had absolutely no appetite and we could feel our bodies getting weaker, due to the lack of oxygen.

Of the many groups we met, the most wacky was a Kiwi group out to set the world record for highest dinner party. This was to be done at the summit. The rules state that there must be certain dishes, a properly set table, and a server in formal livery. Imagine the irony of lugging all that food, table and fancy clothes, and at 22,800 feet, no one would be able to eat a single bite!

The summit attempt was really tough, but I had been really strong the whole trip, so I didn’t really think I would have problems. Unfortunately, I didn’t sufficiently hydrate myself, so I came down with a mild case of high-altitude cerebral edema, and hypoxia, just 300 feet from the top! It was a major disappointment. [In retrospect, this was due to a change of sleeping arrangements at high-camp, so I was situated further inside the tent. And since I was polite and didn’t want to disturb my tent-mate by going outside to pee too often as I did not own a pee-bottle, I drank less water that evening, which resulted in dehydration. A potentially fatal chian of events stemming from not having a pee bottle, and being too polite.]

Cerebral oedema, or swelling of the brain is potentially fatal. For me, I was at the stage where I could barely walk. I was so out of it, they had to put my harness on for me, and short-rope me, not unlike leashing a baby learning how to walk. I was fed steroids, and even had to be told where to put my feet, as I had apparently forgotten how to walk. Imagine being drunk and wanting to go to sleep, but at that altitude, sleep would have been permanent. Without my guides taking care of me, I would probably have been in big trouble. Getting back down to base-camp was one of the most difficult things I’ve ever had to do.

When we got back to high camp, that wasn’t the end of it. We still had to get ourselves and our equipment down! 90 pounds of gear, 6000 feet of descent. There was also the lethal kill-mule hill to contend with. So-named because of the mules that slipped and died on it. 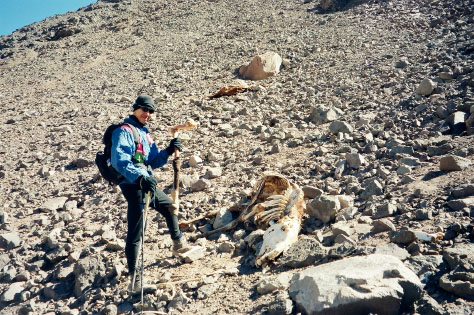 The trip down was brutal on the knees, but buoyed by the thoughts of drinking beer and eating burgers, we managed to make it to Plaza de Mulas, a semi-permanent base-camp with the air of an old-west frontier town. That night, I also saw a woman who had suffered from cerebral oedema come down the mountain, but in her case, she had passed away, and was being dragged down in a barrel. But for the advice of my guide to turn around, that could too easily have been my outcome as well, coming down in a barrel, as opposed to walking down on my own.

At Plaza de Mulas, there were many tents, and the camp boasted a bar playing cheesy rock music. Whilst Singapore has the world’s tallest hotel, the world’s highest hotel is at 14,000 feet. That night, January 1, we sat in the make-shift bar and listened to Croatians, Chileans and Americans amongst others singing songs and playing the guitar. The lyrics “Country Roads, take me home, to the place I belong …” made me think about home. Yet one of my friends told me that he had not lived in the same place for more than 6 months in the previous 10 years. Such a far cry from the stationary lives that we normally lead. Here’s to more travels and adventure.