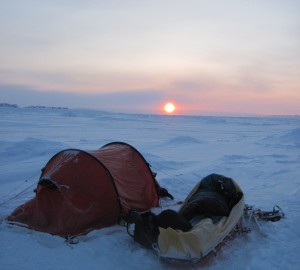 My name is Lien Choong Luen.

I grew up and live in Singapore. Spent some time overseas. Moderately sporty as a kid, nothing special.

Singapore could be called Flatland, with a highest natural point of only 168m tall, which is dwarfed by skyscrapers that top out at 280m.

It has been called the Air-Conditioned Nation, as the weather here is constantly warm and humid at 25-35°C, and all the buildings are air-conditioned. This is also a sly dig at the perception that Singapore is a sterile and climate controlled environment.

Some refer to it as the Little Red Dot, as that is what it appears to be on the maps, a tiny nation that at its length is only about 40+ kilometres (barely a marathon distance), and has a breadth of 25 km. Most people could run that in a few hours.

And yet, that hasn’t stopped adventurous Singaporeans from scaling the highest mountains, or skiing to the North and South Poles, or undertaking months-long expeditions. Khoo Swee Chiow, Edwin Siew, Robert Goh, our women’s Everest team, and many others have blazed a trail for us.

This blog started out as a fund-raising effort for charity in 2011, when I was doing an expedition to the North Pole. I was in business-school at that point. Since then, I’ve collected a few more of my pictures and stories here, in part to share with others, to meet new friends who also love the outdoors, and perhaps even if only in a small way, to inspire more adventurers from our tiny country to venture out into the vast outdoors!

I’ve done some challenging things in my life. In these endeavours, my team-mates and friends have often done fund-raising for charity, but I hadn’t so far.

First, I wasn’t comfortable asking others for money, or even putting myself out there in a public way – as people who have tried to add me on Facebook know, my log-ins there are few and far between. This is my first attempt at blogging, and social media is not something I’m very comfortable with.

Second, there was never a cause that I could connect with. This is not to say that there aren’t many worthwhile causes, just that there were few that I felt personally connected to. I just knew that vaguely, I wanted it to be education related.

As my MBA comes to a close, I find that my friends and I spend quite a lot of time trying to make sense of the past two years here. The classmates I have at the London Business School (until recently ranked #1 globally by the Financial Times 3 years running), are some of the most diverse, talented and amazing people around.

When you talk about the global elite, these guys are it. From Olympic athletes, to financial wizards to singers and entrepreneurs, this is a driven group that strives to squeeze every drop of meaning out their lives, and maximise their life potential. I guess that is the main reason they came to LBS (that and to party it up in London).

That is not a very different goal from MENCAP.

The way I see it, the goals that we have are the same – to become better people, to challenge ourselves, to be independent, to be happy, these are constant in direction; though the actual heights achieved may differ.

That is why I am raising funds for Mencap, and I hope you can help me achieve my goal.